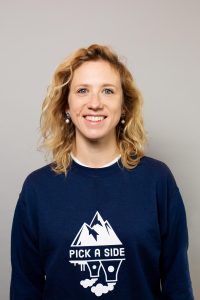 Sasha Luccioni is a researcher working on Artificial Intelligence (AI) for Humanity initiatives, working with Yoshua Bengio at the Mila AI institute on a climate change awareness project using Machine Learning to generate images of the potential future impacts of climate change.

Sasha grew up in Toronto, Canada, moving abroad to do a B.A. in Language Science at the Sorbonne Nouvelle University in Paris, followed by an M.Sc. in Cognitive Science from École Normale Supérieure. Her initial research involved studying cognition and the role of technology in improving the language learning process. During this time, she traveled the world and did research internships in Argentina and South Korea as part of her graduate studies. She came back to Montreal in 2012 and got her PhD in Cognitive Computing from UQAM university in 2018, developing an Intelligent Tutoring System for language learning.

After spending two years working in applied AI research, specifically in applying Deep Learning in industries such as customer service and banking, Sasha joined Mila in early 2019. Since then, she has co-organized and participated in many conferences and workshops, including the Global Forum of AI for Humanity and the AI for Social Good Summer Lab. She is also highly involved in community initiatives, serving on the Advisory board of Kids Code Jeunesse and as co-chair of Partnerships for the Climate Change AI initiative.

Sasha’s most important job is raising her two young daughters to be strong, inspired, independent and kind.